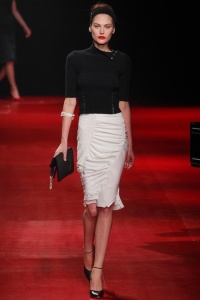 Every single season, FashionTv has a First Face Countdown featuring the Top 10 models who have opened the most who have opened the most shows that season. The Winner Is……..Catherine McNeil!!!!!!!!!!!!
Catherine McNeil has been in the spotlight since 2007, and Fall 2013 has been her best season yet. She walked for the Most Major Fashion houses, from Louis Vuitton to Dior to Marc Jacobs. The Supermodel also opened 7 shows, like Nina Ricci, Elie Saab, Barbara Bui, Guy Lorche, Giorgio Armani, and much more. She also closed 4 shows like Barbara Bui, Kenneth Cole, Nina Ricci, and Paul Smith.

Do  you think that Catherine McNeil deserved to win? Do you think somebody else did?

Here’s a Photo of her first look at Nina Ricci.