Set in a warehouse filled with artwork day Comtemporary artists, Miucca Prada designs a Stunning, bold collection with a little bit of a 70s vibe. 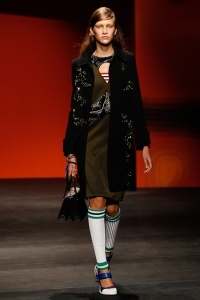 Many of Prada’s dresses and trench coats are bedazzled, in many 70s inspired hues from Brights to pastels like Peach, and some even with Beautiful portraits designed onto the clothing, really making the artwork on the walls of the runway come to life. 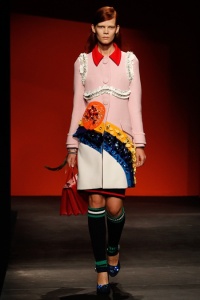 The knit knee high socks, and the brights really give the collection a Chic 70s vibe. 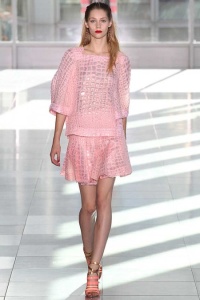 Antonio Berardi began his collection, with an array of Beautiful in lace and all shades of pink, and a little bit of red. Very Romantic and making me think of all things Valentine’s Day. 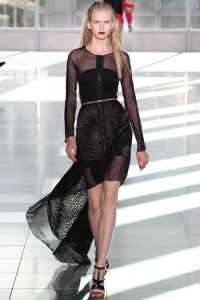 At the end of the collection, Berardi switches from the Romantic shades of Pink, to a more Fun and Dramatic monochrome shades, and leopard print ensembles. The fabrics of: lace, snakeskin, and sheer nylon were still in the collection, with a fun Baroque leopard printed fabric as a perfect fun and still Classy and Girly edition. 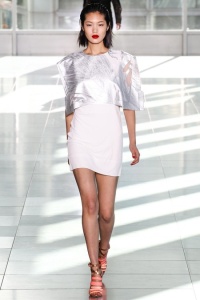 Watching the livestream, I was definitely obsessed with everything about the collection. Even my Dad admired the soundtrack so much that he wants to become “Cool” again. Kind of creepy. But when Wang sent out many fresh faces throughout his show, I am still pretty excited to see which will become the Next Supermodel by the end of Spring 2014 Fashion Week. As Wang’s known for doing so. Supermodels Behati Prinsloo, Georgia May Jagger, Kati Nescher, Joan Smalls, and Erin Wasson closing the show made remarkable, (and exciting), appearances.

I admired the button-downs, and the laser-cut leather jackets paired with really look waisted pleated skirts, for such an edgy take on Classic appearal. Which I shave noticed throughout Wang’s collection, filled with pieces of all colors, most of the looks consisted of a Classy, more formal separate, and then paired with something more edgy or causal, like a laser-cut leather jacket or a baggy pant. Definitely the Chicest, and Versaitle way to show off some edge with Classy separates. Something that I am now begging to try. The one piece that I am definitely begging to have is the  shirts that said, “Parental Advisory,” that Georgia May Jagger and Sam Rollinson both sported. Now who wouldn’t some Alexander Wang for Spring? 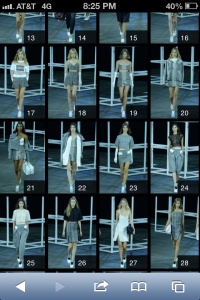 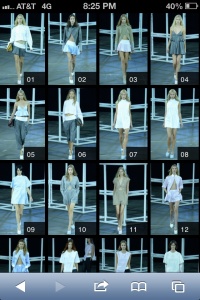 Photos courtesy of my iPhone from Style.com

To view, click on the Navigation, and open up the one listed, Season Handbooks and click on the link listed there. There are tools there to zoom in and out on, if you are using a computer.