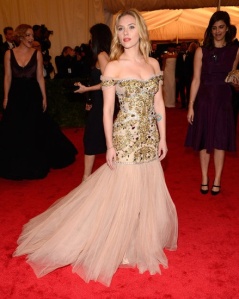 Each year, the Costume Institute at the Metropolitan Musuem of Arts, hosts the Met Gala every year, in New York City in the month of May, to celebrate fashion. And everybody from Supermodels like Gisele Bundchen and Heidi Klum to Top Runway Models like Sigrid Agren and Liu Wen to Every Fashion designer from Marc Jacobs to Karl Lagerfeld to Miucca Prada, to hollywood favorites like Justin Timberlake and Emma Stone, attend fashion’s most notable event of the year.

And this year, the Met Gala’s theme is all things, Punk. Which means that everybody attending the event will wear something oh so Edgy and Punk as they walk onto the red carpet. I’m pretty excited to see what every guest wears on the red carpet, it’ll be interesting to see what punk creations the designers have come up with, and what Straight off the runway looks that people will wear. So far, I know that Liu Wen, Coco Rocha, and Kim Kardashion will be attending this notable event, along with Supermodel Hillary Rhoda as the host. Tomorrow is the Met Gala, and I really hope to see Sigrid Agren, Arizona Muse, Lindsey Wixson, and Karl Lagerfeld also turn up at fashion’s most notable event of the year.